Hello, Hearties! Merry Christmas! And yes, those words will probably appear several times before the 25th. 🙂 I just love this time of year! It’s funny, because this is the first Wednesday of the season when it wasn’t a done deal what I was going to write about. In November, the 1st two were EASY: Marrying Father Christmas and Christmas in Love, right? No brainer! Then I did the memory post as part of the anniversary, and the last Wednesday of the month was birthday week for Martin Cummins; so that was a given too! I admit, I was getting a little worried. So many Christmas movie premieres, and NO actors from WCTH. Then 2 in a row appear just like that, and suddenly, I had a decision to make.

But then, movies got pushed aside because WOW! Have I got news! Remember in the beginning of the blog a year ago, I said that #WonderWednesday wasn’t just for reviewing other projects of WCTH members, but to discuss events involving the cast and/or crew. Well, an event DEFINITELY happened with cast AND crew this past weekend! DANIEL LISSING WAS IN AUSTIN, TX! I’m not sure if he’s still here, but he landed on Friday. I’ve probably been between 20 minutes and an hour from him the whole time! AAAAHHHH! Several people, including my mother of all people, told me I should just get in the car and drive around the city; maybe call all the hotels, nonchalantly asking to speak to him. WHAT??? With 4 children, my husband’s birthday weekend, a completely booked Saturday, and early church on Sunday? Not a chance! Also, the biggest trouble was that I didn’t know where he was. Stuff got posted on social media AFTER he had been at a place and gone, and “stalker” is not part of my job description. So I opted to not.

But guess who he DID visit? None other than Michael Landon Jr. himself, who happens to live here in Austin. No, I haven’t scoped him out either; better to let both of them be. I did have to laugh to see Dan’s pictures of him at clubs, and having dinner with Michael. Probably not a single soul in those arenas recognized them! That’s probably the way they wanted it, but I still find it ironic when so many of us would die if given the chance to catch a glimpse of them. And can you imagine what would happen if by some chance, we didn’t know he was in our areas, and we HAPPENED upon him? Fangirl freak out! 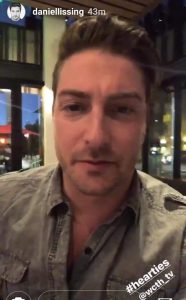 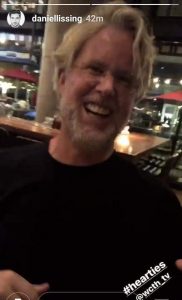 One of my friends totally dared me, (are we in junior high?) to tweet Dan, and invite him to our hometown Christmas parade. I did it, though. I must have been crazy! Here’s the exact tweet:

“@DLissing I hear ur in Austin. If ur looking for a good time 😉 come 10 minutes north to #PflugervilleTX to our Christmas parade tonight at 5. Bring friends! 😁 @PandaHeartie u can come too.”

However, I don’t think he made it. Darn it all! But, I was on a float, it was dark, and a spotlight was shining in my face. So who knows? 😉 He does have one more chance to accept an invitation from me to a Nativity event I’m a part of this Friday and Saturday. I don’t think I’ll hold my breath. I want to be alive for this Christmas!

But the REALLY funny part about this whole scenario is the timing. Most of you know I have a 2-year-old son. Well, he has started recognizing Dan in pictures and on screen, and says, “Dack!” It really is adorable! So about Thursday last week, something hysterical happened. We had Hallmark Channel on, and a preview for Christmas in Love popped up. I asked my son, “Who’s that?”, and he answered, “Dack!” So I thought we’d have a repeat of that when I showed him this picture from Dan’s Instagram. 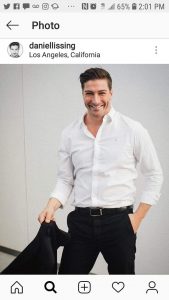 To my utter shock, when I asked my little boy who it was, he answered, “Dada!” I laughed pretty hard! It was even funnier because a while back, my son did something totally out of character, (I can’t remember what now!), and Will said, “That’s not MY son! Who’s is he?” He then went on to lightheartedly tease me that it was Dan, saying I’d had an affair with him before I’d even heard of him. 🙂 (I discovered WCTH when I was pregnant with said toddler.) So it was all in good fun!

I thought it would be fun to tweet Dan about it, then the next day I find out he’s flying to Austin. My friend Sarah and I couldn’t stop laughing for a full 5 minutes, joking that Dan was coming to meet his son. Even my husband let out a reluctant chuckle, and this after Liam called Dan “Dada” again. We had December Bride on, but my husband was IN the room, and he still did it! 😀 Will then tried to ban saying the name Jack in the house. HA! To quote Rosemary, “Oh that is so sweet, [Will], like you think you actually have a choice!”

Well, I hope you enjoyed this little change of pace to #WonderWednesday. Everyone enjoy making things merry and bright, and while I’m doing that, I’ll keep my eyes open for any DLS’s (Daniel Lissing Sightings). This is Hooked Heartie, signing off. May your heart let your hope blossom!