And now, it’s Hump Day! Welcome! I hope this fun little post can be that perfect little bright spot or breather you need to break up the day. Since this is the last Wednesday of February, I thought we’d switch gears a bit – take a break from the mystery, and hold on to the last remnants of Valentine’s Day. And what better way to do so than remembering a total classic?! The blue ribbon goes to…”All Things Valentine”.

A fun thing about this one is the WCTH involvement. There are three actors, but guess what! They’re all men! I don’t know why I find this so amusing, maybe because it’s such a dominantly female program. The other interesting part is two of the men play total nasties on WCTH, and all three characters here have the most tender hearts you’ve ever seen. There’s Serge Houde (Judge Parker) and Daryl Shuttleworth (Inspector Houston) from Season 2, then Jeremy Guilbaut (Ray Wyatt) from Season 4. Serge plays the owner of the Mexican restaurant Avery and Brendan love to frequent, and we’ll talk about the other two later.

This one is a real winner, and a total gem! In this blogger’s opinion, it’s pretty close to everything a Valentine movie should be. It’s well-written, well-directed, and VERY well-acted; a sort of “You’ve Got Mail” reverse plot. They get along famously in person, but are at each other’s throats in text. They even own up to it at the end when Brendan comes to apologize for the biting remarks his alter – ego typed to Avery’s anonymous column. Avery declares, “I think you and I do better in person than in print.” But my personal favorite element is the gradual building of the chemistry. It was slow and steady, but not absent. Sam Page and Sarah Rafferty do a fabulous job of showing initial attraction, then letting the chemistry grow and develop, until by the end, they’re in love. 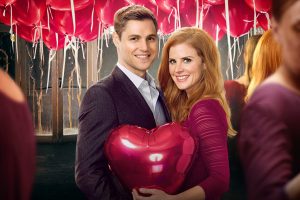 Brendan plays his part in this very craftily. Every time he asks her out, he brings up the “anti-Valentine club” since neither of them is a fan. (By the way, he does a complete 180 by the end saying it’s his favorite day because it brought them together.) When he asks if he can come to her place, he says the anti-Valentiners, “a misunderstood lot,” need to “commiserate”. Then when he asks her to dinner, he casually throws in that “the club needs a hangout.” The references increase in “severity” when he asks her out for Valentine’s Day, saying he doesn’t want to “get kicked out of the club”, finally leading up to the big one: he jokes that the club will be “disbanded” right before they almost kiss, (which doesn’t happen that time thanks to her dog!). It keeps it light and fun, gives him an avenue to express interest, and honestly, gives him a shield to hide behind until he’s ready to come out.

Oh, and just to make sure we’re straight arrow here, yes, Avery did her part in the assertive arena. Brendan says the one thing he likes about Valentine’s Day is the chocolate. Avery jumps on that, inviting him to come to a confectionary, and learn to make chocolate…and she almost kissed him first!

My other favorite part of this movie is the friends and family. My dad’s name was Darryl, but obviously spelled a little differently from the actor. Still, it just drew me further in, and made me enjoy the father/daughter scenes that much more; every daughter out there knows how important it feels to know your busy dad has taken an interest in something you love! That, and how special the moment is when you see how long he’s saved something you made for him eons ago. I still remember finding a letter I had written to my dad at age 11 among his things after he died. Knowing that it was that crucial to him, that feeling has never left me.

The nephew’s acting was stiff and pretty mechanical, but he was still young and cute enough that he could get away with it. And the innocent perspective his character gave Avery when things went awry made their relationship heartfelt. When she and Brendan are on the rocks, Avery tries sulking. But she decides instead to focus on a different kind of love, that of her family and friends; and she encourages her readers to do the same. But she goes shopping to buy presents for them, dresses herself to the nines, and goes to be with them. Now, this is Hallmark, so of course there’s a happy ending. But when her character didn’t know that, it didn’t keep her down.

Then, friends. Actually they’re Brendan’s friends. First, there’s his ex-girlfriend McKennna, played brilliantly by Kimberly Sustad, because she annoyed me like crazy! But then you have his best friend, Kit, (Jeremy), who has fallen for McKenna’s best friend, Pru. I always love it when there’s a romance with secondary characters. It feels like the protagonists are sharing the wealth. It was funny when Brendan questioned Kit on his motives for exercising and getting fit. Kit lists very logical reasons: “I wanna get in shape, lose the love handles, work the cardio, live a little longer.” But what is Brendan’s comeback? “Who is she?” Yeah, he’s no fool! But poor Kit is a scaredy cat, and he doesn’t really have a way of words. So, he keeps buying scones from Pru’s bakery instead of talking to her. The one time he DOES try to talk to her, she shoots down every compliment and conversation starter. 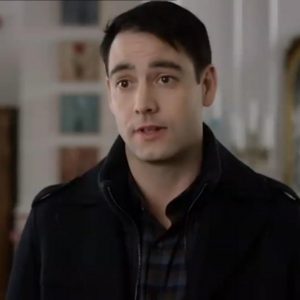 But Valentine’s Day is D-day, or should I say V-day, for Kit. He throws caution to the wind, and trips into the bakery that evening, carting a load of a box of chocolate, a bouquet of roses, a huge teddy bear, and a bunch of balloons, leaving Pru with no doubt of his feelings. Then with his arms crowded with “visuals” as he calls them, he says, “No pressure, but I was wondering if you’d like to go to dinner.” Even though I think showing up at her work in front of her customers with a larger-than-life display screams “pressure”, Pru decides to relieve Kit from his suffering, trust that his intentions are honorable, and go to dinner; but only after making him promise that he won’t break her heart.

And there you have it: a Hallmark Valentine classic! One that I think is a cut above the rest. So I hope you enjoyed this final discussion on love, (*smirk, snort*) everyone. This is it for this week, so I’ll see you on Monday! This is Hooked Heartie, signing off! May your heart let your hope blossom!