Welcome to #WonderWednesday…albeit a day late! Sorry. Family stuff. Time to reveal who our mystery spotlight is. Funny coincidence, or maybe it was planned from the get-go, that the weekend of this man’s birthday, (there’s your hint! It’s a man!) coincides with the same weekend he’s being featured in a marathon. Does that give it away at all. Well, let’s do the big reveal, and find out, shall we? Drum roll please……………………………………. 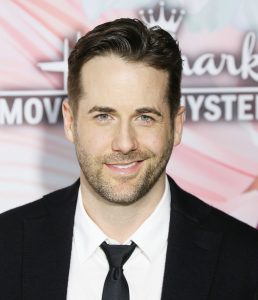 Mr. Niall Matter is celebrating his 39th year of life this Sunday. And beginning this Saturday, Hallmark Movies and Mysteries is airing an Aurora Teagarden Mysteries marathon. Seeing as how Niall is a key character in 4 of those films, looks like several #Sleuthers will celebrating Niall’s birthday WITH him.

Quick sidenote since we’re talking about Aurora Teagarden – the other man I suspect to be front and center in the run of librarian mysteries is Yannick Bisson. He portrayed Martin, the spy boyfriend. But I just finished the BEST series on Hallmark Movies Now that was aired in the early 2000’s called Sue Thomas: FBEye. He plays an amazing FBI agent named…wait for it…Jack! So if you own the app, or you’re thinking about getting a free trial, try that show on for size. You will NOT regret it, especially if you love American Sign Language…and that’s all I’m going to say. 😉

Okay, back to Niall. In honor of his birthday, I am reviewing Aurora Teagarden Mysteries: A Game of Cat and Mouse, the first of the trilogy that premiered in August. This is the first Aurora movie in which Nick is officially a significant other; he’s only been potential up to this point. It’s only fitting that we spotlight the installment in which the villain is obsessed with “Professor Charming”, as she calls him. Actually, there are THREE women obsessed with him in this film: Aurora, Valerie the housekeeper, (hence the socks in the title,) and Tammy’s character. Funny enough, Tammy’s character, Brie Carson, celebrated her birthday in this movie.

I admit, the saddest thing to me is when a murder mystery begins, and it becomes obvious that one of the victims is engaged. Just the thought of someone being taken down right before they begin their life with someone. It makes the homicide doubly tragic. And when we see the ransacked home of the first victim, there’s a knocked over vase of pink roses that I’m betting were from her fiancé, so it’s just sad.

But she doesn’t move on well, because she tries to kill the woman dating the next object of her affections. Nick’s (Niall) face upon learning that all this could be surrounding an obsession with him reminds me a lot of Lee when Bill asked him to fill in for him as sheriff. He laughs at the absurdity, then sobers when there’s no joke about it. You gotta feel sorry for the guy, discovering that people are getting hurt because of someone’s fixation on him. Interesting how she tries to justify and explain it. When she’s holding Roe at gunpoint, she lays into the killer’s soliloquy, saying that when “you study murder long enough,” you begin to wonder, “What are the rewards?” She answers herself immediately: “Control, power, the ability to right wrongs”. Apparently in her mind, Nick and Roe is a wrong to be righted, because she goes into a little tantrum, talking about how she quit her job to be with Nick, and it wasn’t fair that Roe cut in line when it was Brie’s turn…talk about childish!

To quote Oliver on Signed Sealed Delivered: From Paris With Love, it seems like “poetic justice” that Nick figures out that Brie is the murderer. He is the one who connects the handwriting Brie scribbles on the photos to her notes on students’ papers, then links that to her compulsions and habits that remove all doubt. The real justice, I think, is when Brie is searching through a barn for Roe, gun raised at the ready. Nick has come after Roe, thanks to a location app, and he’s searching the barn with a crowbar in hand. They stumble into each other. Busted! If she HAD gotten away with getting rid of Roe, I’m very doubtful she would have succeeded in securing his affections after THAT encounter. Hard to develop feelings for a person who offed your significant other; right, Gowen fans? 😉

Okay, let’s talk about the man of the hour. Niall plays really great romantic leads, and his characters are always so easy to talk to, among other things. For one thing, when Roe’s best friend, Sally, (not Roe herself, but her friend,) is in danger, Nick spends the night on the couch. He’s awakened in the middle of the night by a prowler, and chases after the shadow. He tells Roe to go back to bed, promising to stay up, and keep watch. And after all that, he leaves to teach an early class. And even though Roe brazenly declares, “I read modern detective novels, where women know how to rescue themselves!” he’s always there to “aid” in the rescue, (even though, in my opinion, he does quite a bit of rescuing!) What a guy!

My favorite moment, though, is toward the end, after the harrowing experience is finally over. Nick asks Aurora if she’s okay. She graciously and gratefully admits, “I’m okay because of you.” When she reciprocates the question, at first he just passes it off with, “Yeah.” Then he thinks better of the mundane answer, and starts spilling: “No. This past hour, thinking I might never see you again…” He interrupts himself to take her into his arms, and plant a very desperate kiss on her. He pulls back, very relieved, and almost sighs, “Now I’m okay.” Hard to resist that!

And that is where I leave you. If you haven’t seen A Game of Cat and Mouse, I’m betting you’ll have the chance this weekend, so stay tuned. Then we have a brand new episode of When Hope Calls dropping on Friday, the Good Witch Halloween movie on Saturday, and another Crossword Puzzle Mysteries on Sunday. Busy, busy! And stay tuned for Monday’s post, which will have another recap of When Hope Calls. See you then! This is Hooked Heartie, signing off! May your heart let your hope blossom!