Boy, does THAT tagline describe Monday’s show! EVERYONE was taking gambles! Well, welcome to #WonderWednesday/#MondayMusings Part 2, and Happy Hump Day! I think that’s especially fitting now, since we are back on track, and watching again. So now we can count down until we see a new episode! Before I talk about Monday’s episode, I promised someone I would mention a few things. 😉 I’ll start with one here, then save the other for later in the post

Number 1: Similarities. If you’ve been following the blog a while, you know I like to write #FanFictionFriday stories, and sometimes my friend Sarah helps. 😀 (Only kidding, sweetie!) We write in between seasons because we like creating stories that could plausibly happen in the actual plot line. So, often we use interviews, cast spoilers, behind-the-scenes photos and videos, etc. to get ideas, then make up the rest. Well this time around, we were able to knock out two stories during the hiatus. Had to have SOME kind of WCTH in our lives while we waited, right? Even if it WAS just in our heads. (“A Secret Too Well Kept” parts 1&2, and “Romance: Quarantined” parts 1-4 here on the blog under the category #FanFictionFriday, if you’re interested!) Then we see how close we were when the show comes back. Well, turns out that between the two episodes, we had several similarities. And here they are in no particular order:

a) Faith shockingly took Rosemary into her confidence, and asked her to keep the secret. (I was laughing as I wrote that in the story because I thought it was ludicrous to even think it would happen! 🙂 )
b) Rosemary did, in fact, plan a dinner for Faith and Carson
c) Even though Rosemary was exaggerating to justify buying the telephone, she mentioned needing it if Lee needed to warn her about a plague. Our second story was all about an epidemic of diphtheria sweeping the town.
d) (I admit, this one is probably the most inconsequential, but it’s my favorite.) In “Romance: Quarantined”, when Bill is trying to retrieve the anti-toxin for the town, he impatiently says, “We don’t have time for niceties.” When the government official came to offer him a judge’s position, he said about roughing up the other judge, “There was no time for niceties.” 😀 I actually had to rewind it to make sure I’d heard right.

Okay! Let’s talk about “Surprise”, Monday night’s episode. First event of the evening, and the one that got a LOT of attention, (but for very different reasons,) is Jesse striking oil. The potential for a huge fortune, and what is Pascale Hutton, (and the rest of the Hearties, including me,) worried about? The fact that he got black oil all over Clara’s beautiful, and LIGHTLY colored clothing. Good thing they’re “gonna be rich”, because she’s gonna need a new outfit. 😉

Did you notice that the geologist was Stanley, the real estate tycoon from Daniel Lissing’s “December Bride”? He’s in so many movies WITH When Calls the Heart actors, that I was starting to jump to him being one himself. And now, it’s official! 🙂 I just hope he and Henry don’t swindle Jesse and Clara somehow, because then I really WILL be mad. I gotta say, between the interactions in this episode, and what I saw in next week’s preview, I’m a little suspicious.

So, Allie…Allie, Allie, Allie. To quote Elizabeth when talking about Lucas, “I don’t know what to make of [her].” She quite the little fireball! I had to laugh when Bill tried really hard, (and failed miserably!) to exert his authority, and have her call him “Sir.” And she laughed in his face! Then she momentarily transforms into a mini-Rosemary with her over dramatic “Now please, give me this moment.” I immediately thought, “Oh dear! We’ve got another drama queen. And a sneaky one at that!” when she ran off. She really is “ten going on seventeen” as Nathan put it; a delinquent tomboyish seventeen-year-old. But one thing in her favor, she’s proof that Nate has parenting experience, with a child that’s not his own, no less. And even though it was quite reluctantly, the tough new Mountie actually accepted help from Elizabeth. SCORE: Nate-3, Lucas-1.

And that brings me to Lucas. “Not very sporting” is what I’ve noticed is his catchphrase. My goodness, he is a man is a mystery, isn’t he? I gave him one point because he looked at Elizabeth as though he was just as fascinated by her as Nathan was, but for VERY different reasons! Nathan is touched by her sweetness and caring for his niece; Lucas is captivated by her spunk and fiery words, and because she stood up to him. I am curious to find out what his backstory is. They keep giving us these little teasers like “I’ve only cheated once in my life”, and that he likes gambling because of the stakes. Let’s hope he doesn’t take Elizabeth’s sarcastic suggestion, and open a “gambling school for minors”.

Speaking of which, I have to tell you something funny: I was actually LIVE tweeting on Monday, something I don’t ordinarily get to do with WCTH because I don’t watch the episodes until Monday, so this was a treat! When Elizabeth mentioned the school, I tweeted, “Welcome to the gambling school for minors!” Chris McNally retreated me, and added: “The Lucas Bouchard Center for Kids Who Can’t Gamble Good and Wanna Learn to Do Other Stuff Good Too”. If you’re a fan of the movie “Zoolander”, (which I’ve never seen. Someone had to tell me,) that makes perfect sense, and you should be rolling on the floor right now. 😀

Bill & Lee vs. Elizabeth & Rosemary. This was a fun juxtaposition to watch! For one thing, if you saw the season preview, you know that Bill telling Lee that he’d been offered a judgeship was originally a scene with Abigail. But I thought it was done perfectly, especially since Lee had that same reaction when Bill deputized him. And it made their babysitting scenes all the better!

Oh man! What a day that must have been on set. Being a mother of small children, I imagine Lincoln and Gunner’s mother was either clenching her teeth, ready to catch whichever twin was in front of the camera; or she was sitting back, and laughing her head off! It was hysterical! Them fighting over who was better at caring for Baby Jack, trying to get rid of each other, the shot when they both leaned into frame over the crib at the same time…but nothing can beat when the ladies walk in the door to find all three of them snoozing, (Bill snoring) away! Pascale tweeted a picture of that shot with the remark: “Best acting these two have ever done” 😀

So while they were snoozing away, Rosemary and Elizabeth are not “cramping the guy time”, and getting some much-needed R&R. I took note of the food so the next time I have a ladies’ night, I can copy Rosemary’s menu. Since Season 6 premiered in February, we haven’t seen Elizabeth relax and let go, so it was nice to see her get that chance. The best part was how they were talking about Jack. I loved that they were able to do so fondly and nostalgically, without too much heartbreak; not to mention without any malice, as those two weren’t exactly getting along at that point. Then they move on from Jack, and have that incredibly amusing interaction about all the people who have found love in Hope Valley, including the “terrible liars”.

And that brings us to my grand finale- Number 2 of what I promised to mention: The Doctor’s Bag. Before either of us watched it, Sarah texted me predicting something like that would happen based on a picture we saw. She called it. There, I said it! And I watched before she did, so I texted her, “Three words: you nailed it.” 😀

Most of us had to take a VERY deep breath on Monday night when Carson…dropped his medical bag. <3 Definitely his finest moment of the evening, and he expressed himself in that moment much more smoothly than when he called Faith a “sweaty Pinocchio”. It was perfectly timed too, happening after he’d heard the story of her father, then put her at ease with, “Anybody would be crazy to reject you.” SO ROMANTIC! I tweeted to Andrea Brooks that we’ve reinvented (but rebooted sounds better) “Drop the Mic” for them. And that is………….Drop the Bag, of course! People are going to be talking about that bag drop and the ensuing smooch for weeks to come! Poor Florence though! She can’t seem to catch a break. Everybody is deciding to kiss right in front of her! 🙂 “Quite provocative!”

Well, that wraps up my thoughts…most of them anyway. 😉 So now, we’re back on track for Monday and Wednesday blogs while the season is airing. But next week is Kavan’s birthday spotlight week since Monday was his actual birthday. So we’ll see you next Monday! Enjoy the photos! I didn’t take as many this time because the decorations were the same. Click the link in the comments to see those pictures. The child is my 5-year-old dressed specifically in heart clothes for the night. <3

But I was very proud of that cake. I made plaid pants in honor of the man who made them cool again, and his birthday! 😀 I was totally winging it, though, and pro cake decorator is not on my list of talents. So I was nervous, but it came out alright. If you caught Paul Greene’s FB LIVE yesterday, he challenged us to do something that scares us. Mine’s covered. Any ideas for yours? This is Hooked Heartie, signing off! May your heart let your hope blossom!

P.S. If you’d like to see some Austin Hearties singing to Kavan, feel free to check out my tweet. My handle is @kamidramagirl . 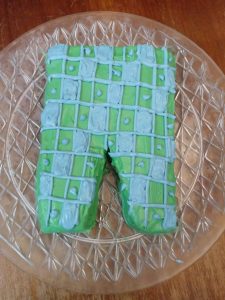 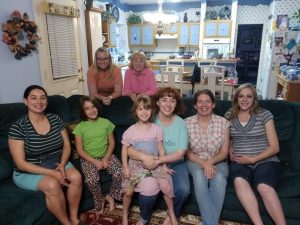 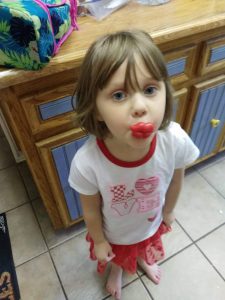