How’s it going, everybody? Who’s got school starting this week? Who’s trying to shop and/or pack for school? And who’s still trying to recover from something already beginning? Good thing we have our happy place of Hallmark movies to relax on Saturday nights…or another night of the week with the blessed technology of a DVR. 😉 And if said movies have an actor or behind-the-scenes member from “When Calls the Heart” in them, there’s a very strong possibility you can read about it here. And lucky for us, “A Summer Romance”, (and the following post,) is one that #Hearties, AND #POstables can enjoy; even #Sleuthers had an iron in the fire, pun definitely intended. There were S’MORES involved in this plotline, and I had the worst craving for one! Those irons include Erin Krakow, of course, Geoff Gustafson (SSD), Ava Grace Cooper (WCTH), Sarah Strange (GSM), Kevin O’Grady (GSM, WCTH), and Milo Shandel (WCTH) 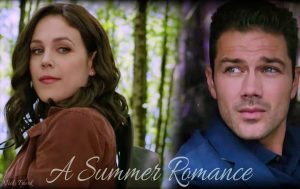 But I’m going to start in an…unorthodox place: the music. I’m a theatre girl, and musicals have always been my specialty. Singer comes right after Actress, and right before Writer in my list of favorite hats to don, so I appreciate the power of music, and how it influences the movie mood. For that reason, I listened carefully from the moment wolves and coyotes were mentioned. Did you hear it? There was a single chord of foreboding melody that added the slightest bit of fear and suspense. Then when Sam tells JR that Simba the mountain lion “probably” will leave him alone, the notes sound like tiptoeing, insinuating the act of said fierce animal creeping up on his now suspecting prey.

I’m not a connoisseur of today’s popular music, especially not country songs; so I can’t tell you the titles of all the songs used or the artists who sang them. But I can tell you it was catchy! My boys were dancing and bouncing to it every time they heard even a hint. I can also tell you is that the lyrics played illustrated the journey taken by both characters very well, especially when Ryan Paevey pulled back the dressing room curtain to reveal himself in an extremely attractive “cowboy outfit”. But the best example is at the very end. It’s got the feeling of things being wrapped up, and the relief that feelings are out in the open. And the two lines that stand out the most, the ones that I think express how JR is feeling are: 1) “I wanna sweep you off your feet tonight,” AND………………… 2) “I’m head over boots for you!”

Two minor funny points that I want to stick in here just for a laugh:
• At the very end when JR is, in Buck’s words, “going after a girl,” he tells Sam that he “just needs 5 minutes.” Did anyone else find it funny, and maybe the slightest bit ironic that that was about how long the “angry drama” lasted? Not to mention that when he said it, there was basically 5 minutes of movie left. 😉
• A kiss interrupted by a mountain lion. Well, that’s definitely a new one! But I don’t know which is worse: the fact that a mountain lion interrupted the kiss; or that when he did, instead of saying, “We should get out of here as quickly as possible!” Sam said, “We should turn in.” What??? Where was the big poster that read, “Welcome, Simba! Please help yourself and eat us!” Maybe them holding hands created a protective force field that kept Simba at bay. 🙂

POstables, was Geoff a hoot, or what?! It was very different seeing him in a 3-piece suit, acting stuffy as all get out! I busted up laughing at his panic when Richard told Todd about all his new activities, then him placing an emergency call to the president of the board. And he just has such great comedic timing, that his interactions with Buck and Sam were so funny, but seemed so natural. I had forgotten he was a member of the cast, so it came as a fun and pleasant surprise. It’s always fun when I see actors from both my favorite shows in the same film. It’s very gratifying.

And speaking of that favorite show, how many nods to When Calls the Heart and other projects of Erin’s did we see? Easter egg hunt anyone? 😛 I started counting. And when I went on Twitter, (I hadn’t been able to watch and tweet LIVE,) I saw that several others had done the same thing. ♡

• The fresh start. This isn’t an exact reference to WCTH, but I find it very relatable. That’s exactly what Elizabeth has wanted and MADE for herself several times: Leaving home initially, leaving home after Season 2, New Year’s resolutions, getting her job back, getting married to Jack, picking herself up after Jack’s death to bear and raise her son…all kinds of ways!
• This is more of an anti-nod, but I had to mention it! The fact that Sam is such an amazing cook, and Elizabeth couldn’t evening boil water in the beginning.
• Milo Shandel played Hal Perkins, the banker. In WCTH, he plays Mr. Jenkins…the banker. 😀 He and Ryan Paevey are REALLY GOOD at portraying businessmen!
• The groceries will be fine in the back of the truck. Once again, this is more of a poke or an elbow nudge, but a similar situation happened in “Chance at Romance”. (Her name was Samantha there too!) Only in this case, it was her luggage left in the back, and it WAS stolen.
• The stranded camping. Yes, there have been many camping instances in WCTH, even 2 cases of stranded camping overnight…but they don’t include Elizabeth. No, I’m referring to the incident in “Chance at Romance” when gas is actually siphoned from a vehicle by a 12-year-old matchmaker. 🙂 Nothing that dastardly happened here, but we did get to see 2 people bond on a very spontaneous night away. 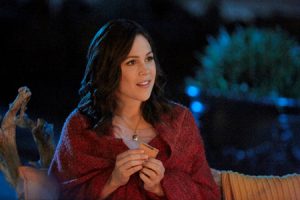 • Final one, my other favorite: at the dance. When everyone has been asked to dance except Sam, JR stands right next to her, and holds out his hand. She’s doing the coy “I’m a wallflower” face until he does. Remind you of anything? Season 3, the Kindness Week dance, when Jack “saves” her from being “stood up” by Cody.

It’s always fun to watch movies like this, and see what we can find while enjoying the talent. So enjoy! And as luck would have it, we have two reviews on this movie, so head over to When Calls the Heart Blog, and see what she had to say. I will see you Friday for another of the #FlashbackFriday moments you suggested, and stay tuned for some BIG surprises coming in the next few weeks! This is Hooked Heartie, signing off! May your heart let your hope blossom!