Welp, it’s Wednesday! How’s everybody’s week going so far? If you don’t already know, something pretty big is happening in our family this week! My oldest is turning 8 tomorrow!!! I’m a little in shock that this is actually happening, but there’s lots of activity surrounding it, so my mind is kept occupied.

I did have an interesting thought, though. There’s been a lot of talk on the official fan page about children watching WCTH. So I thought, what better way to celebrate my little Heartie’s birthday, AND get a fresh and new children’s perspective on the show…plus she got a HUGE kick out of being featured! I hope you’re sitting down, because her exact words are here, and they are HILARIOUS!

1. So Kyrah, who’s your favorite character?
– Can I have 3? Jack, Elizabeth. And someone who’s strong and stands up for herself. Can you guess?
– Abigail.
– Uh huh!
– Do you want to be like Abigail when you grow up?
– Mm hmm. And there’s 1 more: Bill. He’s also strong. And 1 of my favorite lines is with the figgy pudding. “Love? Oh very funny! Be sure you pick up some at the store.”

2. What did you like most about the Christmas movie?
– If it was LAST year, I’d say Elizabeth putting the ornament on the tree, and Jack comes up behind her, and…yeah. (May I add the sneaky and coy smile crossing her face at this moment.) This year…can we come back to this?
– Sure
– (After a lengthy pause, and answering other questions) My favorite part about this year is when everyone is in the little house, (cabin) because everyone is safe, and the baby is SO cute!
– Do you like that they named the baby Jack?
– Of course! Why wouldn’t I?
– It’s just a question, silly!

3. Speaking of babies, how do you feel about having a baby brother named Jack?
– It is 1 of the BEST things that has happened in my WHOLE LIFE!

4. How sad were you when you heard that Jack was dead?
– I was the SADDEST fan! (Skeptical look from me) Well, I FELT like the saddest fan
– (After I’d asked the last question) You know, Mommy, I really WAS the saddest fan!

5. Would you have preferred to have Jack die, or have someone else play him?
– I would rather have him die because I don’t want ANYONE taking Jack’s (Daniel’s) place!
– (At this point, my 4-year-old pipes in) I want to MARRY Daniel Lissing! (Look out, Dan!)

6. Do you think When Calls the Heart can still be a good show without Jack?
– Mm hmm
– Why?
– Everything always turns out good and has a happy ending.

7. What are you looking forward to most in Season 6?
– Little Baby Jack growing up. I hope HE doesn’t die! If he did, I would SO upset!
– And Nate BETTER NOT replace Jack! I do want Elizabeth to fall in love again, but not with that guy. That guy does NOT look like he could fall in love with that woman! But I DO think he’ll make a GREAT Mountie!

9. If you could have anyone from When Calls the Heart at your birthday, who would you have? What would you do?
– I would have Erin, Daniel, Abigail, Bill…what’s his real name?
– His real name is Jack.
– Really??? Also Pascale, Lee, and who used to run the church?
– Pastor Frank?
– Yeah, him! Baby Jack too! And I would have a WCTH party, Mommy would KNOW how to prepare it! We would watch the show, have a heart cake. We’d have heart-shaped stuff that says “I am a Heartie”, because I am the BIGGEST Heartie!

10. What’s it like having Mommy be a blogger?
– There are no words for how AWESOME it is!
– Do you like my stories?
– Yes!
– Do you have a favorite?
– You would have to read them to me again.
Then she said “I love you”, and scooted out the door to school. Gotta love her candor! I hope this has been entertaining for you, giggling at an almost-8-year-old’s point of view of our favorite show! This is Hooked Heartie, signing off! May your heart let your hope blossom! 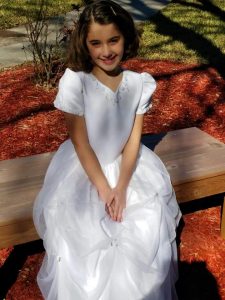 And Dan, I thought you should get a glimpse of your future fiancée!