Oh my gosh, everyone! I’m so sorry about the silent streak! I’ve been running, running, running between my boys having a relapse in sickness, and multiple Christmas events; some of which I was partially in charge. In fact, I was actually composing this post as I sat behind the scenes at our church’s Nativity display event; I was part of the musical numbers, and I was in charge of costumes for the monitors watching over the scenes. We had literally hundreds of displays (just over 400) from all over the world! So amazing!

Now for today’s movie. I thought about doing part two of Christmas Town, but as a die hard Heartie, I would be remiss if I didn’t review the Yuletide film of our leading lady. Plus, for #WisemanWednesday, it’s a perfect choice, because the main man sure THOUGHT he was wise. That’s right! I’m speaking about “Sense, Sensibility, and Snowmen”. I’m certain I’m the only blogger who’s covering it. HA HA! But I wouldn’t consider myself a true fan if it didn’t go on here. And in addition to Erin, there are two other WCTH actors in this movie! Did you catch all of them? There’s Jan Bos; he was Edward’s dad, and the mining company lawyer in WCTH. There’s Jason McKinnon, who had the nerve to be on the screen at the same time as Erin! 😉 Just teasing, Jason! You’re a wonderful actor! In SSS, he played the sweet lawyer Brandon; but in WCTH, he’s that sniveling and conniving, (not to mention “shockingly bold”. Thank you, Rosemary!) Thomas Higgins. And BONUS! We have Gary Peterman and Emma Pedersen from Signed Sealed Delivered. He played Mr. Roberts on the episode “The Masterpiece”, and here, he was the very difficult Stanley Green. SHE was the Montaldo’s employee, Nikki, in “One in a Million”, and here, she was part of the Dashworks team.

To start us off, this movie is in the same category as Christmas Town: totally loved the whole thing, it was just on the wrong channel. From that very first moment when Ella (Erin) turns around, and with that signature light in her eyes, tells Marianne to hurry up, you knew this was going to be a lighthearted, festive romance. Speaking of that moment, it was very telling in so many ways. We find out that the writers switched the names of the sisters, which kind of threw me off, I admit. I’m a huge Sense and Sensibility fan, so I noticed it right away. I wondered if it was done with a purpose, or just to switch things up. And I was under the impression that the party planning business was a small, start-up company with just the two of them. But it was their father’s company, and there was a group of employees. And one cannot go wrong with a wreath of cupcakes, so they were obviously doing something right. Right? 😉

May I interject here that after witnessing the dynamic duo that was Erin Krakow and Kimberly Sustad, I am wholly convinced that Kimberly would make an amazing guest star on WCTH. Who’s with me? Their chemistry and the way they played off of each other was…NAILED IT! I don’t know if my favorite part was them whispering very obviously over their shoulders about revealing Ella’s feelings for Edward, or the Christmas morning gift frenzy. And there’s also that tiny little and HILARIOUS scene where Brandon and Marianne are literally spying on the reluctant couple. Can you just see Kimberly as a best friend from the city, or a cousin of Elizabeth’s? Funny enough, I can totally picture her as a Hope Valley resident, or a frontier woman just outside of town. Something to think about, Hallmark Channel.

About the leading man: geez, what a know-it-all! But they usually are at that point. Watching Edward getting knocked down a peg or two in that scene at the bar was classic; especially Brandon’s facial expressions indicating he get off his high horse or fail. Ella really socks it to Edward a time or two on her own. The prime example was the incredulous tone and shocked expression Ella manifests when Edward mentioned that kids never test-played with the toys from the company. Or maybe it was when Ella retorted that she’d get Edward a bulk order of beige scarves with beige accents. Those scenes are great, but it’s nothing like him buying the suggested snowman scarf as proof of her influence on him.

Oh and yeah, the kiss helps too! 🙂 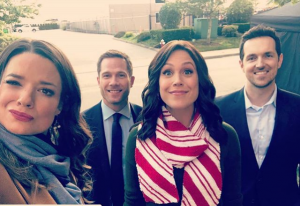 I think Luke and Erin made a nice couple. Did you know they went to Juilliard together? It really worked. I think they should pair up again.

And on that note, this little Christmas elf needs a little sleep. Can’t wait to talk to all of you again. Hopefully, that will be Friday! Please keep coming back and enjoying the content. I do so love writing for you, and hearing your feedback. As always, sharing, liking, retweeting, and clicking on ads is incredibly helpful. And if you’re spreading holiday cheer with online orders, it would be amazing if you were to do your Amazon shopping by clicking on one of our links.

Keep making it a Merry Christmas, everybody! This is Hooked Heartie, signing off! May your heart let your hope blossom!