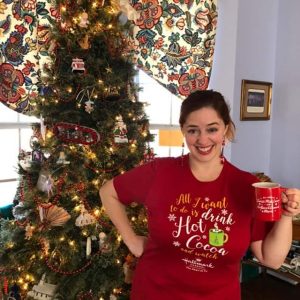 Happy New Year, my dear friends! How are all the Hearties on this fine, fresh, first day of a new decade? Did you do something fun last night, and/or today? For photographic evidence of the Clements family shenanigans, scroll down to the bottom. 😉 We had snacks and sparklers, noisemakers and nail polish, and of course, our 2020 adornments! 😀 And both my girls even made it to midnight for the first time!

This morning, naturally, we watched the Rose Parade on Hallmark Channel, our jaws dropping at all the incredible detail on those magnificent floats. We’ll be like Jack and Elizabeth a little later today, and set our New Year’s resolutions.

Well, here we are! We’ve arrived at our final holiday post for the season. Sigh! It was lovely while it lasted, and as Elizabeth declared in “Home for Christmas”: “No one wants Christmas to end.” But if it was around all the time, it wouldn’t be special. I really struggled with which movie to review for the last Christmas movie we’d discuss. Four components helped me make the decision: 1. It’s #WisemanWednesday, and this film literally used the words, “wise man”. Logical decision. 😉 2. I know the director, so that kind of obligates me to talk about it. Only kidding, Maclain! 😛 3. This movie would be fresh in everyone’s minds today, because there was an encore presentation last night. Last, but CERTAINLY not least needs only two words: 4. Andrew. Walker. Am I right?

Andrew sure was a busy bee this season! Several actors were in multiple Christmas movies this year, but very few were the leads in each movie they were in! And there’s no doubt that he gave a flawless performance in both. There’s just one thing, and I’m taking an official poll, so either put your answer on the Twitter poll, or in comments here, or a comment on Facebook. A) Andrew Walker WITH facial hair in “Christmas on My Mind”, or B) Andrew Walker WITHOUT facial hair in “Merry Bright”? My vote? I’ll cast the first one. Definitely B! I’m a sucker for a clean shaven handsome face; there are few men I prefer with a beard. I definitely wasn’t feeling that huge mustache in WCTH Season 1.

Speaking of which, let’s pinpoint the WCTH actors in this one. There are actually quite a few. There’s Andrew himself. Clayton James (Brad the fiancé,) is off and on as Kevin Townsend the blacksmith, the one Fiona likes. I hope they keep that up because I think they’re adorable! Sebastian Billingsley-Rodriguez (Ryan the art student) was that adorable boy, Adam, who Rosemary helped during the carnival at the end of S5. But my favorite other than Andrew is none other than Preston Vanderslice (Beau) was that sweet Mountie who took a message from Elizabeth to Jack back in S4.

Andrew and Ashley were cute together, but my absolute favorite couple to watch in this movie was Andrew and Preston as brothers! I couldn’t take my eyes off them; they played off each other so well, and were very easy with one another. I can’t pick the best of my two favorite parts involving them. It’s a toss-up between all their “family discount” banter, and Beau’s first interaction with Lucy. Zac informs her they broke up two years ago. Lucy looks to Beau as if for confirmation, and his confused but affirmative nod just made me crack up! Those are two actors I never tire of watching, and they were being guided by my favorite director. It’s a win-win-win! 😀

I had never seen Ashley Greene in a project before; I’m one of THOSE people that did not get aboard the Twilight train. This is also her first Hallmark movie. I think she did a good job. She and Andrew were well paired. You’d never know there’s an 8-year difference between them. The premise here was complicated at best! Can you imagine thinking you’re engaged to a guy you’ve been broken up with for two years, who’s dating someone you don’t really care for, and you’re engaged to a man who don’t remember at all! Try to keep all that straight after a head injury! Then poor Zac! The horrible position he’s in, trying to remain neutral when he’s obviously still in love with her! Awkward!

My favorite scene between the two of them has to be when Zac finally procures a Christmas tree with “the family discount”, i.e. taking without paying, and they decorate it together. Like “a wise man” told Lucy long ago, “finding the right tree should not be rushed.” The decorating isn’t rushed either. There’s lots of comfortable yet flirtatious touching, and plenty of playful banter. And to top it all off, Lucy puts Zac’s lost Christmas sweater under the tree with a big red bow.

There is one part that is unsurpassed, I’ll admit. The final kiss. Talk about heat! I’ve always thought Andrew was a great screen kisser, and that blocking was very moving. There’s something about a man rushing toward you ready to sweep you into his arms. It was a pretty amazing kiss! Well done, team!

So, we’ve officially arrived at New Year. Happy 2020, all! See you next week! This is Hooked Heartie, signing off! May your heart let your hope blossom! 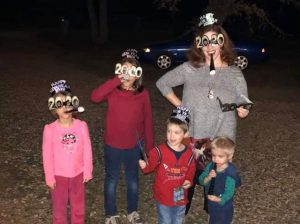 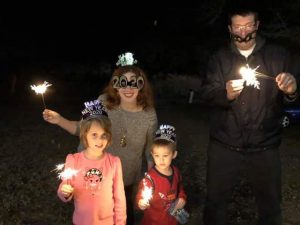 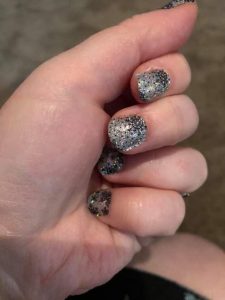