Happy Friday! I bet I know what you’re thinking: “Kami, you PROMISED to deliver #FlashbackFriday!” I know, I know! Things did get busy yesterday, and I’m sorry. But in my defense, I’m only a day late. And besides, with posting one day late, I’m able to include the S7E4 recap with the blog! It was only released this morning. So there’s one good thing.

By the way, I confused someone with my use of episode numbers. So from now on, to dispel any puzzlement, I’m not going to include the Christmas movie in the numbers. It will be strictly the season run, starting with “A Moving Picture” being Episode 1. So hopefully that helps you wonderful readers and listeners follow along better.

So! Welcome to #FlashbackFriday. Since it is the end of Kevin McGarry’s birthday week, my Hooked Heartie tradition is to review his favorite moment of his character. I was lucky enough to be able to ask Kevin what his favorite Nathan moment is thus far. Given the fact that this is only Kevin’s second season on the show, there aren’t as many to choose from. Also, since Nathan’s story has only just started getting deeper, that narrows the field even more. So we’re not flashing back very far, but it’s such a great moment that I don’t think anyone is going to care.

Kevin’s favorite Nathan moment so far is when Nathan is forced to arrest his father at the barbecue in front of the whole town. There are two reasons Kevin mentioned for his choice: 1) The storyline was one he “could really sink [his] teeth into”. 2) That moment was such a powerful one for him to portray; it’s the kind of dramatic moment performers love to act out. 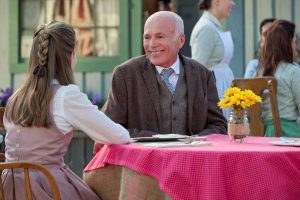 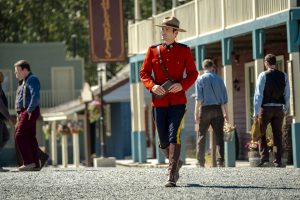 We already talked about this moment in the recap, but this is the perfect time to really delve into Nathan’s thoughts and reasons for his actions. First of all, what a performance! Kevin was fabulous this whole episode. As for this particular moment, can you imagine how much was racing through Nathan’s head? We all saw how angry he was when his father showed up in town, and the great lengths he took to keep Allie away. The Mountie instincts and past history were not exactly a formula for welcoming dear old Dad with open arms. He fought against every effort Archie made, and called him out on every excuse. Only after Allie’s sweet and insistent list of reasons she should meet her grandfather did he relent even the tiniest bit. And even then, Nathan was still hesitant, double checking if his father had TRULY quit. But he did invite Archie to sit with him and Allie at the town picnic, so he was VERY slowly warming up.

Then, just when the sun started breaking through, the thunderclouds roll in with a vengeance! Can you imagine Nathan’s rage? He let his guard down the tiniest bit, and according to Nathan’s feelings, he was betrayed! The fuming in his face is unmistakable. He’s trying to hold his emotions in and remain professional, but without much success. He’s seething as he stomps into the middle of the picnic, and slams Archie’s glass of lemonade down, then hauls him off. Not only is he angry because he thinks his father lied for the umpteenth time, but it pains him to know end that now Allie is involved. Then rub salt into that barely-healing wound when all this drama happens in front of the woman for whom Nathan is falling fast! His heart is broken, and he is livid. He’s on the verge of tears when he tells his father he wants so badly to believe him. And that’s why he’s also angry with himself, almost as much as he is with his father. 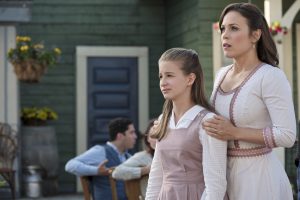 Kevin’s performance in this scene really is fantastic, and he pulled us as an audience down the path of discovery with him. Happy birthday week, Kevin! And everyone, we have something to look forward to amidst all the chaos and fear: a return to Hope Valley and Brookfield ! It’s almost worth being cooped up for, and those trips always make us feel better. So I’ll see you Monday for #MondayMusings on When Hope Calls! Then…Friday brings with it another #FaceOffFriday! Exciting!

Icing on the cake: here is the S7E4 recap I promised. Have a blast with it! This is Hooked Heartie, signing off! May your heart let your hope blossom!