Even though Thanksgiving has passed, I’d like to finish out November naming blessings I have. Today, I’m grateful for people who have the thankless jobs: the police officers, the fire fighters, the garbage collectors, all those who don’t get their fair share of praise. Them, and the people brave enough to portray villains on a beloved TV series! HA HA!!!!

Alright all you Henry Gowen fans! This is YOUR week! HAPPY MARTIN CUMMINS WEEK TO YOU!!! I’ll come right out and admit that I’m not the biggest Henry fan, even though I have a great respect for Martin as an actor. In fact, I’d go as far as to say that me not liking Henry shows how good of an actor he is. Right? Right?…Okay, moving on! 🙂

Martin’s birthday is November 28, 1969, so he will turn 49 this Wednesday. Wow, the year before the big 5-0! I wonder what his plans are! Well, we definitely know a very time-consuming project that will tie him up professionally: filming Season 7 of When Calls the Heart! Because, of course, that’s going to happen, right Hearties?! Right!

Martin was previously married to Brandy Ledford, whom you might recognize as Doyle from Kevin Sorbo’s series Andromeda. They were divorced in 2004. On July 12, 2013, Martin married Christine Wallace. With the two marriages, he has 4 children, 2 of which are beautiful twin girls. You may have seen a picture of Daniel Lissing holding one on each arm in the past; I understand he thought they were pretty adorable!

There’s actually a really hilarious story about children that I heard Martin tell from the Hearties Family Reunion #4. (No, I wasn’t there, but I did see a video. Ulli Jespersen, yours was my most recent point of reference, so thank you!) Martin talked about the fact that he always gets picked to be the scary guy/bad guy/killer. He said, “For whatever reason went I get on screen, it’s like, {hit table} [scary voice]: ‘That’s enough!’…So yeah, I don’t play a lot of good guys. And what’s up with that? I have 4 kids, and they are my LIFE!” And Kavan, bless his heart, he didn’t miss a beat! He busted out with, “But you HAD 9 kids!” SO FUNNY! But it’s true, he does make a really good bad guy!

So we know what he does professionally, but did you know he’s been a director as well? He’s directed 5 projects, including 1 episode of The Outer Limits, and 3 episodes of Poltergeist: The Legacy. And speaking of his professional work, have you ever heard him talk in an interview? His voice is COMPLETELY different from Gowen’s! He slips into a character/screen voice whenever he plays him. It definitely makes him feel more menacing! But hearing a light-hearted, easy-going voice coming out of that mouth…totally threw me for a loop the first time. I finally got used to it.

I haven’t heard him say what his favorite season is, but I have heard him say that he really likes the way his character is evolving. He also likes the way the writers have “caught on” to the chemistry between Lori and himself that they subtly play so we as the audience never know what’s going to happen next with them.

Last thing I’ll share is something I learned from the Season 5 bonus features. Martin got asked: “Who was your first celebrity crush?” He let out a huge guffaw, and laughed, “Jessica Tandy…I love the old ladies…what’s up with that?!”

Well, Hearties, that wraps up Day 1 of Martin Cummins Week. Martin isn’t on Twitter, and I’m not on Instagram, so if any of you who DO have it want to tell him to check out the posts this week, I would not mind a bit!

And a special thank you to Jennifer Stieger who took this picture of Martin at HFR#4 with Leah Hardwick and Tonya Guess on either side. Thanks, ladies! This is Hooked Heartie, signing off! May your hope let your heart blossom! 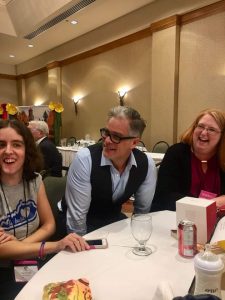