Whoa, what a whirlwind of a week it’s been, Hearties! But I did manage to get my daughters off to school for their first day yesterday! Phew! Now all I have to do is live through every morning of their grumpiness at getting up early, and CONTINUE to get them to school for the next several months. Piece of cake! 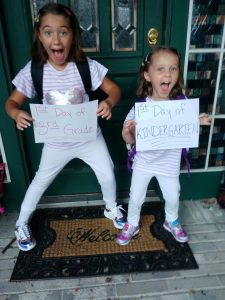 My little boy was feeling left out, saying he wanted to go to school too. Luckily we have this fabulous CD called “Sounds Like Learning” by Barbara Milne that teaches early skills like the alphabet, counting, and simple adding…all through songs! When Kyrah took to it, I decided to make visual aids, and I’ve managed to hold onto them. So today, Liam got HIS first school lesson. And Jack joined in. 😀 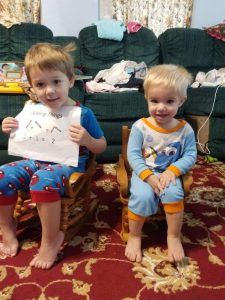 On that note, (Insert laughter at my corny joke,) I give you the Back to School edition of #FlashbackFriday to finish celebrating our Back to School Week. I asked my friend, Amy, (who was a teacher for several years,) what her favorite classroom or teaching moment was in WCTH. She only thought about it for a second before the bright flash of an idea lit up her eyes, and she said, “My favorite would have to be when Elizabeth worked with the dyslexic student. When she made the letters from dough, she really showed her repertoire of skills.”

We decided to watch the episode together. I wanted her teacher’s insight. The first thing she mentioned was one of the first things I noticed: “In my classroom I get to determine what’s fair, and isn’t fair.” A good teacher knows that different students have different needs. One of those students is the sweet, humble, and dyslexic Bo Grady. The one that the old teacher dismissed and called “too slow to learn”, but the innovative Miss Thatcher calls him, “Brilliant, simply brilliant!”

Between Elizabeth’s determination, her compassion, and her higher education, she pulled of what everyone else in town considered impossible, even Bo’s own father. Carl Grady is an amazing (and non-violent) example of how crippling fear of the unknown can be. Amy also pointed out that while he was afraid of Bo failing in the cruel world, what if Bo succeeded? Then Carl would have a son who was smarter than he. For a proud provider like Carl, what worth would he feel he was after that if Bo went on to become “a doctor, a scientist, or a teacher” like he and Elizabeth talked about? But he can’t express that, so he just lashes out, and gets angry at the mention of a “simple test”.

Even though Elizabeth manages to mix schoolwork with pleasure 😉 along the way, the journey is long and tedious, and very frustrating! Bo has to deal with failed reading techniques, James humiliating him in front of the class, watching Emily, (who is SO MUCH younger,) declare material he is struggling with as “too easy”. Even James looks sorry at that point.

Finally a breakthrough! Elizabeth figures out that Bo needs three dimensional models to help his brain function in reading, and she tirelessly works on making letters out of dough to help Bo feel like a champion…just in time to watch Bo walk into the mines with his father. How frustrating would that have been, just after an inspiration as huge as that?! But that Thatcher woman is full of fire and tenacity; she’s not giving up. Bo won’t take them, so she leaves them on the porch. The letters are glossed over kind of quickly, but they are true craftsmanship! Elizabeth took great care to create them…and in reality, whatever crewmember made them is a true artist!

Bo takes a cue from his persistent teacher, and tries…only to win! I’m taking a writing class to improve my story composition, and one thing my teacher pointed out to us very deliberately is, “Show, don’t tell.” Instead of a telling Carl Bo can read, she simply says, “Bo, will you please read for us?” And Bo drops the mic. 😀 He reads to his father and mother, and his father is so proud, he has no fear in asking his son what letters or words are.

Jack is right. “I guess it proves if you want something bad enough, you find a way to get it.” I hope you go after something with that kind of will, that kind of courage. And so I leave you with hopes of a fabulous weekend, and fulfilled dreams. This is Hooked Heartie, signing off! May your heart let your hope blossom!