Hi, Hearties! Sorry this is so late. We had an impromptu family day, so I’ve been preparing for and attending a huge picnic. It was busy and tiring, but we had fun. That’s what’s important, right?

Well, we’ve come to the end of yet another birthday spotlight week. Loretta, it is this blogger’s hope that you had a marvelous birthday a few weeks ago, and that you approve of the week that in which we highlighted your charming self, and your prickly yet loveable character, Florence.

Which is the perfect description of Florence in our #FlashbackFriday today. I’m telling you, Season 6 must have been pretty good, despite the hiccups, because I keep coming back to it for moments to delve into. If you’re a real Heartie, you’ve probably already figured out which moment I’m going to review; or you have a sneaking suspicion.

As we all know, Florence has quite a breakthrough in a…certain episode; a few actually. When Fiona first shows her the new-fangled machine, it “sounds a little too modern” for Florence’s taste, (and notice the narrow-eyed glance down at Fiona’s scandalously high hemline on “modern”). But when she’s told it’s a great way to, in a nutshell, gossip about someone behind their back, she’s suddenly very eager for a lesson on how it works. Then she takes it a step further, and gets a job WORKING said equipment! 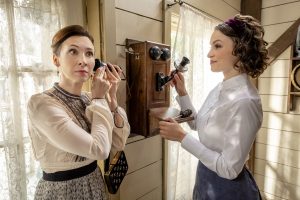 But as we know, it doesn’t go well. She tries so hard to act professional and competent, but the poor thing keeps coming up short. First it’s too much glee and excitement, followed by sharing a little too much information on the line when she’s on duty, then literally crossing wires, and incorrectly connecting calls. And then, the big BOOM!

I’d run out with embarrassment too. The thing is, I think this is quite a development for Florence. I don’t believe she’s faced with things that are hard for her very often, except the occasional substitute job for Elizabeth. 😉 And we all have seen how she’s handled that in the past. 😀 But on a regular basis, I’m pretty sure she doesn’t come up against things she does badly. But working with something so modern, AND having her first job outside her home, that presents her with several challenges simultaneously, and it all takes its toll.

What is it about looking vulnerable that makes moments so appealing? Because when Florence is on the verge of tears, hair mussed up, eyes wide with terror from the sparks, and voice high and timid, we go from laughing at her misfortune, to sympathizing with plight. This is big for a woman like Florence. She’s doing her best to step into the ever-changing, modern world, even though her sensibilities are VERY comfortable in the past. She’s trying to better herself, and improve her life, and she’s afraid of failure because it’s hard to change.

But instead of clamming up and stubbornly getting angry, she opens up to Fiona. Not only that, she lets a voice that’s younger, but more experienced in the field, comfort and reassure her. That alone makes her character grow in leaps and bounds. And in my opinion, we’re going to love her even more next season.

Have a great rest of your weekend! This is Hooked Heartie, signing off! May your heart let your hope blossom!