Well, here we are at the end of another week! And tomorrow is December 1st! Advent calendars start, decorating gets finished up, baking increases, shopping gets busier…if we thought things went into full force on November 23rd, then this is going to warp speed! For my last November post for being grateful, I am so grateful for this season. To quote a lyric from my favorite singer, Josh Groban: “And even though this world needs so much more, there’s so much to be thankful for!” It’s so fitting that Thanksgiving and Christmas are close to each other, in North America at least. We remember to be grateful, then we’re reminded to spread goodwill to all. Fitting, isn’t it.

Well, it’s time to say goodbye to Martin Cummins Week. But we can’t do that without a #FlashbackFriday moment for Henry Gowen. When I asked for votes on which moment to feature, the consensus seemed to be the trial and the surrounding events. I thought about doing a highlight on an evil moment, but I didn’t think you die hard Henry fans would ever forgive me!

You know one thing I found interesting about this series of events is Bill’s attitude. He himself said to Abigail, “It’s my job to see the bad in people.” But when he hears of the judge’s reputation, he becomes very solemn, and tells Abigail the news with a very concerned face. But when the judge is extremely lenient, (even you screaming fan girls HAVE to admit Henry got off super easy!), Bill goes back to the same old Bill: “That man has more lives than a litter of cats!”

But seriously, he DOES! Was it Bill or Jack who said that Gowen always has a way of “landing on his feet”? I know it wouldn’t make for very good television to have Henry sitting in a cell for Season 5 and 6, but I really did want to see justice served…just a little. Yes, I do still believe in redemption, and I’m glad Henry isn’t behind bars. I just think Henry could help make up for his mistakes with a bit more of a severe sentence, even with a way to get out of it later. But oh well. He seems to have learned his lesson.

He BETTER have, with Abigail constantly sticking her neck out for him! But I think the trial was a good way for her to defend him, because she speaks both sides. She admits he’d made mistakes, and the situation looks bad because she seemed beholden. But she also gets the chance to say he deserves a second chance because there IS still good in him. (Now I sound like Luke Skywalker!) And in true Abigail fashion, she finds the humanity in the judge.

The very telling moment comes when Abigail visits Henry in jail. She asks why he stole town funds, which as the current mayor, I think she has every right to know. We see a glimpse into Henry’s past as the son of a share cropper. And we see more of the human in HIM when he admits his astonishment that Abigail “still seems to believe in him”…after everything he’s done. In the past, her efforts have fallen on deaf ears and blind eyes, but the culmination of her Good Samaritan kindness is finally rubbing off on him. He’s come a long way from the caged animalthat threatened, “I’m going to ruin you.” Now let’s hope he holds true to his promise to the judge to not make a fool of him.

Well, Hearties, I have some wrapping to do! My husband’s birthday is Sunday, and the anniversary of him proposing is tomorrow! We also get to be in our town’s Christmas parade tomorrow. Lots to do! So I better go, but I want to share something first. The pictures is a Kami Clements original. (HA HA!) I participated in a WCTH virtual camp this past summer hosted by Lee’s Plaid Pants. The challenge was to do an artistic representation of some kind depicting Gowen in Season 1, then Season 5. If nothing else, you can have a good laugh! I hope you all have an amazing start to December. Remember next week starts my new schedule, so I’ll see you all on Wednesday. And dear Mr. Cummins, if you read this, we all hope you had an amazing birthday week! This is Hooked Heartie, signing off! May your heart let your hope blossom! 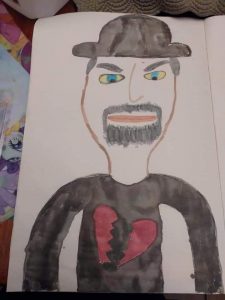