Happy Friday, all! How are all of you doing? My girls just had their very last school event yesterday, so we’ve officially started summer. The idea IS a little daunting, given the fact that we don’t know what the conditions of summer will be like, as far as social distancing is concerned. But we’re going to be like the Light Brigade, and forge ahead, right?!

Before I start the post for today, I just want to acknowledge a few dates. Yesterday was a big day for one Mr. Brian Bird; the Big Man, the Master Pot Stirrer, and our beloved Papa Heartie. So, if you haven’t already, don’t forget to drop him a note of some kind. Speaking of birthdays, TODAY is a very special day for someone dear to me, and to you. It’s Mrs. Kaycee Simpson’s special day, one of my lovely cohosts on the When Calls the Hallmarkies: Heart to Heart podcast. So happy birthday to both of you. You touch our lives in very different, but very profound ways.

And, it’s actually thanks to Kaycee that we have this post. She and I were chatting about possible future blogs I could do, and she helped me come up with the idea of this lovely little series we’re going to chat about for the next several Flashback Fridays. So, today we start Heart to Heart: Friendship in Hope Valley. We’re going to explore all different kinds of friendships that take place in “our dear little hamlet.” And if those words sound familiar, like they could spout from the mouth of a certain Rosemary LeVeaux Coulter, you’re right; and that is with whom we are going to begin. We’re starting with Elizabeth and Rosemary, mostly because it’s the one that’s gone through the most drastic transition. And, as you can probably guess, it’s going to take a few posts. 😉

We all know that the friendship between Miss Thatcher and Miss LeVeaux was not exactly…smooth sailing. The very first glimpse of our red-clad thespian causes Elizabeth’s eyes to bug out, and she and her sister can do nothing but pass a bewildered look between them. Despite the shocking first impression, (dramatic curtsy and all!), Elizabeth is still polite and friendly, eagerly speaking with the new arrival…even if she becomes a bit distracted. Then Rosemary’s eye lands on a figure similarly dressed in crimson, and her true motive for travel becomes crystal clear. And if you’re like me, you wanted Rosemary to get back on that stagecoach and hightail it out of town after the first five minutes, pantaloons and all! 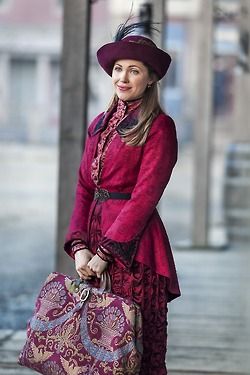 Elizabeth probably felt like someone had punched her in the stomach, and no matter how hard she tried in the following days, she couldn’t get around Rosemary’s very imposing presence. Elizabeth’s face would take on what I use to call the “Rosemary Smile”. It pushed its way to her teeth every time Rosemary was around because Elizabeth was always trying to deal with her. Watch for it. It happens quite often in those first episodes.

Every time Elizabeth almost gets a leg up, Rosemary uses it to lift herself. Take the meeting about building the new church. Elizabeth was gaining the advantage, since Rosemary seemed quite appalled that Jack had spent reward money on the church. Then things looked up even more when he talked about “someone very special”. And what does she do? She snags the attention, proclaiming, “Thank you, Jack.” Who does that? Not to mention the lady does everything she can to outshine Elizabeth’s meager cooking skills with her superb chicken fried steak. Low blow! The one thing that saves the situation is Jack takes his life into his hands, and consumes the burnt food. That’s love! And it sent a very clear signal.

But, probably the worst thing she did was pitting Jack and Elizabeth against each other by eavesdropping then blabbing about Elizabeth’s job offer back East. She couldn’t let Elizabeth tell him herself, or let them work things out. In the beginning, the woman was, in a word, devious.

Jack’s words to Rip never rang more true: “I think it is safer in here with you than out there, boy.” That, and his declaration to Rosemary herself: “Your presence could sidetrack an army.” Not the best way to start a friendship, but I’ve seen worse…I think. Luckily, we know everything turned out okay. But, we’ll talk about that another day, another time. Have a great weekend friends! I’ll see you next week! This is Hooked Heartie, signing off. May your heart let your hope blossom!