Happy Friday, Hearties! Welcome to yet another, and very special installment of #FriendshipFriday. This is a different one than all the others you’ve seen so far. Fair warning, this one is very near and dear to all of our hearts, so there might be a few emotions. Be prepared, it’s a REAL flashback. It’s the deep and abiding friendship between Jack Thornton and Leland Coulter.

First of all, this relationship could have gone way south super fast! Lee could have been completely threatened by the fact that a very handsome Mountie living in the same town was once engaged to the woman to whom he is very attracted. Did everyone follow that? 😉 But seriously, instead of creating a very awkward situation, Lee attached himself to Jack, and the two of them had a friendship that lasted until the very end. It started when Lee volunteered lumber and manpower to help build the church/school, and the rest is history.

But let’s talk about that history. Just like I said before, instead of feeling threatened by Jack, Lee decides to take the nice guy route, and be trusting. Lee asks Jack for tips on dealing with Rosemary, as opposed to making it a competition. They even joke about it, like at New Year’s when Lee stated TO JACK that his resolution was “to say ‘no’ to that woman.” And then there’s when Lee is about to get married, and they toast to him: “The man of the hour!” Jack very comfortably quips, “Anyone marrying Rosemary deserves more than an hour.” Total acceptance, and complete comfort on both parts.

Then there’s the history they’ve created between each other. One of my favorite parts of the beginning stages was when Jack was trying to downplay his relationship with Elizabeth. Rosemary isn’t the only person in Hope Valley Lee is learning to manage; he’s got his eye on Jack. What’s his perfect, “Lee answer”? “You may be selling, young man, but I’m not buying!” Lee’s no fool!

There are so many facets to this “bromance”. Lee is very quick to sincerely tell Jack how grateful he is for his friendship when he tells Jack what an amazing friend and best man he is. Then, when it’s Lee’s turn to be the best man, he helps calm Jack’s nerves, (after riling them up,) and runs all over Hope Valley to make sure his friend’s wedding goes as smoothly as possible; especially after the church burning down. He was even willing to substitute his and his wife’s rings in the ceremony. They also make a great team working side by side, whether it’s finishing homes for needy people, or building floats to usher the Christmas spirit into town. Lee practically gives Jack the lumber for his OWN home too. And hey! Jack saved Lee’s leg until Faith could get there to properly treat it, right? These two always seem to be there for each other. 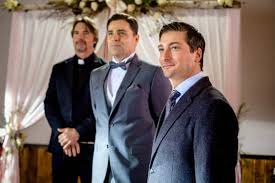 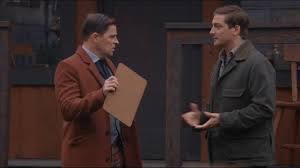 But here’s the best scene that illustrates the closeness these two share, in my opinion. I even remember saying out loud, “I love this, that these two can talk to each other; I love watching their friendship.” It’s when the two of them are sharing a cup of coffee, and Jack is trying to talk out his thoughts about joining the effort in the Northern Territories. Lee is completely attentive, doing nothing else but focusing on Jack. He knows that this must be eating Jack alive inside, and he needs to share it with someone. I love that Lee asks him questions; it proves that he’s listening, taking it in, evaluating what was said, and weighing his own words carefully. And when the time comes for him to speak those words, Lee doesn’t tell Jack what to do, what to say, or what to think. He says, “We all have a code, Jack.” He knows Jack already knows what he needs to do; he just needs a friend he can trust to tell him to trust his gut. And that is true friendship!

Well, Hearties, I hope you’re able to find friendships during this time of physical distancing, because they’re some of the interactions that are keeping me sane at the moment. Take care of yourselves, and to quote Signed, Sealed, Delivered: “Take care of your hearts.” This is Hooked Heartie, signing off. May your heart let your hope blossom!