Happy Friday, #Hearties! Well, here we are at the end of another week, and at the end of another month! Phew! It’s a strange feeling when a month has passed so quickly, yet the last week or 2 seem to drag on and on. Have you ever felt that? Well, I have a feeling that time is going to start flying REALLY quickly as we do a landslide into the holidays; and I’m including Halloween!

So as the month closes out, so does our spotlight week on Laura Bertram. I still can’t thank her enough for taking time out of her busy mom and acting schedule to give us fans of hers these fun little details about her and her life. She was a true pleasure to get to know.

Now! Her favorite Mary moment on When Calls the Heart! Any guesses? It’s actually not one you would think of: it’s not when Mary met DeWitt, or the dance. It’s not when Caleb brings DeWitt home for pie, the announcement of their engagement, or even the wedding. No, she picked a very little moment that proved to have a lot of depth in it! Here are her words:

“DeWitt fell in the tug of war, and Caleb went off another way. It felt like it was a crossroads for Mary. DeWitt was her future, and Caleb was…not necessarily her past because he’s her future too. But he’s what her life had been. So she had to make the choice, ‘Who do I follow?’ That moment really illustrated her inner turmoil.”

Blink, and you just might miss it, but it’s there! In S1E6, “These Games”, Caleb cheers, “Come on, red!” Mary is obviously perturbed by those words, because she vehemently claps louder, and shouts, “Come on, blue!” Then Caleb runs off. Mary’s head snaps to the side to see him go, but she makes her choice, and stands firm. The point is only enhanced further when Mary runs to DeWitt’s side, asking if he’s hurt after the fall, then reprimanding her son for speaking disrespectfully to him. Right before the scene fades to black, we see the aftermath of that decision. Caleb has walked away. Although it looks like Mary’s following after her son, her course is heading in a slightly different direction; illustrating the very tight rope she is walking. And of course, even if we don’t cognitively grasp all of this while watching, we feel the essence of the tension. That’s thanks to Laura’s amazing talent!

As I said last Friday, good thing we know everything turns out alright in the end. 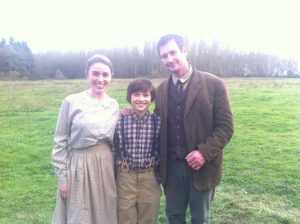 Well, that’s a wrap, Hearties! Have a fabulous weekend! Don’t forget the When Hope Calls tweet fest tonight at 5:00 PST, as well as the encore presentation of All of My Heart: The Wedding to see the line-up of #FallHarvest movies. Then there’s Ruby Herring Mysteries: Her Last Breath on Sunday. I wonder if I’ll be able to review them; we’ll have to see if a WCTH or WHC member makes an appearance. This is Hooked Heartie, signing off! May your heart let your hope blossom!