It’s Friyay, Hearties! That means another episode of When Hope Calls! I confess, I’ve already watched the episode because I thought I had an event tonight. The event got canceled, but can’t be too careful, right? Let me just say, YOU’LL LOVE IT!

Now, on to #FlashbackFriday! I’ve mentioned that I made a new friend, Lara, when she answered my “cattle call” to watch WCTH from the beginning. Well, as I suspected, she’s “hooked”, of course! And instead of watching it on her own, she wants to witness the unfolding of events with me! So I have a perfectly legitimate excuse to watch the entire series over again, and watch the happenings transpire with fresh eyes.

We recently watched S1E5 “The Dance”, and I was struck anew by the scene when Mary Dunbar asks Elizabeth if she can borrow a dress. First off, it becomes readily apparent just how much this evening with DeWitt means to Mary – she is not the type to ask such a favor on a whim. You can see in her body language when she approaches the row house just how hesitant she is. But her desire to look beautiful and make it a special night wins over her pride.

We see a new kind of hesitation when Elizabeth brings her gowns out of the closet for inspection – Mary is completely overwhelmed! In her little world, nothing this fine has ever existed. She illustrates that shock when she cradles the dress like it’s made of porcelain, and declares, “I’ve never worn anything like this in my whole life!” She probably hasn’t seen anything like it either, judging by her reaction.

Then Elizabeth reluctantly brings up the subject of Caleb’s discomfort, and we get one of (in my opinion,) the most beautiful performances that Laura Bertram gave in her time on the show. The tears in her eyes, the tremor in her voice, it’s all so honest and deeply felt. Nothing surface about it! It brings me to tears every time I watch. Mary is such a quiet, private, reserved person, that the fact that she is opening up at all is mind-blowing. But she is, and she reveals just how amazed she is, (and how emotional she feels,) that any man is attracted to her again since her. She also manages to voice her fear that a chance like this probably won’t come around again, and she needs to secure Caleb’s future; she believes she’d be a fool not to.

But when one is set on a path, it’s hard to hear words of caution…from anyone. And even though Elizabeth is an objective voice in this matter, and has heard Caleb’s side of the story, Mary knows he’s “too young to see the whole picture.” Therefore, she has to convince herself that she’s doing the right thing for all concerned, and Elizabeth’s words of warning get in the way. It would be a pretty hard pill to swallow, borrowing a dress from someone with whom you’d had a disagreement, no matter how gorgeous. So Mary puts on her mask of pride again, and informs Miss Thatcher, “I’ll make one of my own work.” And she did. 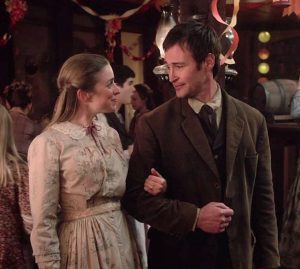 We all know that everything turns out okay, but the uncertainty both of them portray in this scene is just one of the reasons I love this show. They deal with issues, big and small, and aren’t afraid to express honest emotions dealing with those issues.

Well, time to go, and get ready for the When Hope Calls tweet fest. Have a wonderful weekend, and come back on Monday for the episode review podcast. And be sure to keep coming back, because the surprises aren’t over! Love to you all! This is Hooked Heartie, signing off! May your heart let your hope blossom!