Hello, my dear friends! You made it to Friday! Good for you! How was the week? Not to harrowing, I hope. Although, I bet we all are impatiently clenching our teeth as D-day inches closer and closer. Including today, we only have 9 days! We’re in the single digits! That experience can be pretty harrowing! But Hearties are tough, right? I think we should petition to make waiting for WCTH premieres an Olympic sport. It’s just as exhausting! In case you NEED a reminder, which I doubt, Season 5 of When Calls the Heart premieres Sunday, February 18th, 9/8 c on Hallmark Channel. Take pity on me, because I won’t be watching it until Monday. But have no fear, because the 1st #Monday’sMusings of Season 5 will be posted. And if anyone lives, or will be around the Austin, TX area on Monday the 19th, I’ll be having a Heartie Party that evening; I’d be more than happy to have you! Just let me know.

As it is Friday…sorry, I do not have another fan fiction story for you. Since it’ll be airing soon, I prefer to let the show do the talking. Sarah and I will resume the tales when Season 5 ends. And just for fair warning, my baby is due around mid-April, so the blog may have to take a brief hiatus. And don’t worry, I’ll post pictures of the adorable little bundle.

So, it’s a #FlashbackFriday kind of day. With Valentine’s Day around the corner, I thought it might be fun to flash back to Kindness Week. That covers all the different kinds of love expressed on the show. Elizabeth’s idea was brilliant! The project really gave the kids AND THE ADULTS a chance to look outside themselves. We have friendship love in many forms: Abigail stroking Rosemary’s ego that she should be the one to put on the dance, the girls reaching out to prickly Hattie…Hattie even expresses her love for Janie by mourning her so loyally. Now, of course, she does it the wrong way. But she makes amends, and shows a rectifying sort of friendship love by loaning Anna a party dress, and agreeing to dance with Cody for the first dance.

Rosemary, in her own inflated sort of way, shows a serving kind of love by agreeing to arrange the dance, and helping Elizabeth…even if she did insult her appearance in the process.

Cody represents the love for animals, and shows it with giving Rip a bath. Poor Jack probably had to clean up the mess, but he knew Cody’s heart was in the right place. That brings up another kind of love: the love for children. Jack and Elizabeth show us that very special kind of love with warm hearts and open arms…and lots of patience. It gives us a glimpse of what they’ll be like as parents.

An opposite view is Peter. He tries to show his love for Faith, but does so with a controlling and domineering attitude. Communication and understanding, all the attributes of true love, were completely absent.

Then, of course, we have our favorite example of romantic love: Jack and Elizabeth. I could go on and on about them, but I think I’ll go a little outside the box. I want to go to the dance itself. I remember the first time I watched it, I wondered why Jack wasn’t asking Elizabeth to dance; Lee wasn’t asking Rosemary, and Frank didn’t ask Abigail either. My theory was that since Kindness Week was the children’s project, the adults were letting them take the lead. It is precious the way Cody had the courage to take the first step, and get the dance going with Elizabeth. Then as far as he’s concerned, the unthinkable happens, and Hattie asks HIM to dance. But I absolutely LOVE how Jack handled it. He jumps right in, then totally plays it cool with that “stood up” line. She plays along so coyly. My favorite line is, “I know they’re big shoes to fill, but may I?” Add in his signature look toward her, and him holding his hand out to her, and you’ve got magic. Now THAT’S romance, right?

Have a fantastic weekend! Don’t forget to tune in or DVR Signed Sealed Delivered: The Road Less Traveled this coming Sunday, and I will see you Monday!

Okay, admit it: you sang the title, didn’t you? Welcome to the one and only #MerryChristmasMonday… at least for another 7 years or so. Well, the day has arrived. As I’m typing this, there are a mere 7 hours and 40 minutes until my premiere time! My mother-in-law, 3 of my sisters-in-law, my oldest daughter, even one brother-in-law, will all be gathered around the TV with our hot cocoa and our tissues. I’m going to see if I can convince my husband to watch too. That can be my Christmas present to make up for not getting me a Heartie ornament or cookbook.

So how was everyone’s Christmas? We had quite the flurry of activity over here. I was up before my kids! It totally was the pregnancy; wink, wink. Santa brought me this beautiful necklace. It was in my stocking. He must know me pretty well! Appropriate, isn’t it? 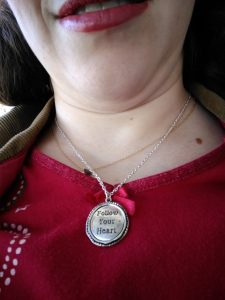 My “kids” got me this beautiful scarf covered with heart emojis. They know me so well too! Actually, my daughter wrote me a beautiful letter as a Christmas present, and at the end, she wrote “you are a hordy”, (you are a Heartie)! But I am TOTALLY wearing this scarf when I watch tonight! 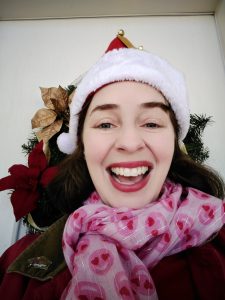 So how is it going to happen tonight? I know the pictures suggest it will happen a certain way. I admit, it doesn’t APPEAR to be as epic as I pictured, but looks can be deceiving. No matter how it happens, I know it will be beautiful. Obviously I can’t write about it now, but I’ll be posting reactions to the movie either Tuesday or Wednesday.

Well, Hearties, MERRY CHRISTMAS! Have a great time watching the movie; either tonight, or whenever you get to. May you feel the peace of the holiday season, even after today is over.

Sorry everyone! Today turned into #FreakyFriday with all the Christmas cookie baking I had to do. So I’ll do a real post tomorrow for #I’mSorrySaturday. In the meantime, my mom is leaving for Christmas, so I got to open some things early! Merry Christmas to me! Seasons 1-3 of WCTH! (I already own Season 4!) And I’m wearing the necklace my dear friend Sarah Nitsch sent me for Christmas! So pardon the pregnant tummy, and enjoy the picture. 😀 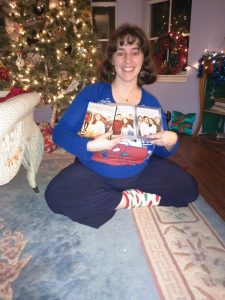