Happy Valentine’s Day, Hearties! And today being what it is, I’ll make this short and sweet. And I hope that no matter what kind of love you’re celebrating today: romantic, parent/child, sibling, best friends, aunt/uncle/nephews/nieces, between cousins, Heartie love, or between yourself and Deity, I hope you do indeed feel loved, and you’re able to do something special to mark the day.

And speaking of love, we are neck-deep in this race for Elizabeth’s love! So, shall we? Round 4! LET’S GET READY TO RUMBLLLLLLLLLLLLLLLE! 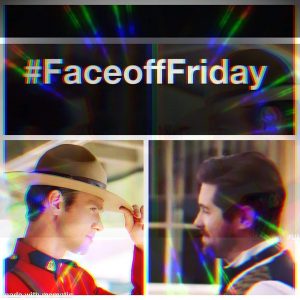 E9: A CALL FROM THE PAST

LUCAS:
+1 The plan to cut the library ribbon together
-1 Curt way he left town
+1 Tried to pull gun to protect Elizabeth
+1 Asking Amos to let Elizabeth go.
+1 Promising Amos every penny in his safe if he will let Elizabeth go
+1 Tiger reflex when Amos hurt Elizabeth’s arm
+1 Trying to pull the gun from the safe to protect Elizabeth
+1 Apologizing for getting her into the situation (even though it was not well received)
+5 Wrestling the gun away from Amos
+1 Attempt at putting coat on Elizabeth’s shoulders (although it was flat-out rejected!)
-2 It was unintentional, but the man DID get her kidnapped

*This is an interaction, but I left it neutral because I didn’t see it as positive or negative: Elizabeth coming to Nathan to report Lucas leaving town.

E10: TWO OF HEARTS
LUCAS:
+1 Wouldn’t have let anything happen to her
-1 Arrogantly declaring being a hero is his “thing” now
+1 His hand over hers for ribbon-cutting
+1 Sharing the book with Baby Jack
-1 The smug look at Nathan
+1 Winning Jack a teddy bear
-1 Trying to show Nathan up at the strong man competition
+2 He won the dance with Elizabeth

NATHAN:
+1 Made her that beautiful plaque
+1 Remembered Emerson was Elizabeth’s favorite poet
+1 Offered to watch Jack at the after-party.
+2 THOSE FUNNY FACES FOR BABY JACK!
-1 Showing off for Elizabeth at the strong man competition
-1 “The founders…would be proud”
+1 Got that final glance

So Nathan is in the lead again, but just by a hair. This is a pretty close race! I’m sweating just writing about it! And next week? Our final countdown: Home for Christmas. The grand finale before our season premiere! Who will prevail? Find out…next Friday! Happy Valentine’s Day again! Just remember that Elizabeth is honoring Jack’s final wish in this “competition”. 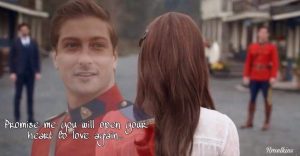 This is Hooked Heartie, signing off! May your heart let your hope blossom!

Happy Hump Day once again, lovelies! How’s everyone? Have a good weekend and start to the week? Well, I hope you enjoyed the movie from last Saturday, “A Valentine’s Match” because…(trumpet fanfare), that’s what we’re chatting about today. Admittedly, the connection is a very thin thread, but that thread popped through the needle of our show just recently, so it’s fresh in our heads. That thread’s name is Ken Tremblett. You remember him, right? That poor Mountie, Patrick O’Reilly, who gets roped into babysitting Julie Thatcher in Season 1? But then, what does he turn out to be six seasons later? A superintendent! He put in his time, that’s for sure.

But in this movie, he’s a dad, the best role a man can have! It’s funny, I was starting to get worried about how little he was in the film. I kept thinking that couldn’t be right, somehow. He’s someone we all have seen very frequently on Hallmark. But then I realized they were saving it all up for the best part of the movie: the father/daughter walk and talk.

This scene was super special to me for so many reasons. First of all, it had me in tears! I lost my own father to cancer 8 years ago, but he became ill while I was away at my sophomore year at college. So I didn’t really get the chance to have that kind of relationship with him as an adult. It was difficult seeing him reduced to such a tired old man because all my life, he had been such a powerhouse who hardly got sick a day in HIS life. But if I had had the chance, I’d like to think my dad would have been that insightful.

Another reason I loved this scene so much was the analogy of the ruined art project. Lately, some events have occurred in my life that have made me question choices, look to the past with regret, think badly of my current situation, and wonder if I’ll get out of the rut. But that story of Natalie taking a wrecked mass of paint and leaves and transforming it into something exquisite that won her first prize…that was truly inspiring. To quote another part of the movie, but in a very different context: “It’s a cliché because it’s true.” We really need to take the sour lemons life gives to us, and make a delicious libation that refreshes and cheers us. We can grab life and run with it, make what we want of it; we just have to put in the effort, and wait it out.

Okay, enough “gush”, as Zach put it. Let’s talk about something hysterical, like the fact that this movie wins Most Awkward for the next Hallmarkies Podcast Awards! 😀 Oh my gosh! I’ve never seen that much awkwardness in a film that didn’t involve teenagers! I thought about counting and naming them, but I lost track. I’ll just name one. The Jess and Eric “fry bite” right in front of a broken up couple in the diner where they had their first, and many subsequent dates? I would have stepped outside too!

Even Natalie was awkward in the beginning! When she was doing her intro for the reality TV show, I actually wrote in my notes, “Is she SUPPOSED to be that fake?!” A few minutes later, my question was answered when her boss criticized her for losing her “authenticity”, but I was legitimately worried for a moment that I was supposed to think she was a good host.

Now, I can’t go on without awarding big-time kudos to Hal Beckett, who wrote the music! I always knew when an uncomfortable moment was coming up because of the brilliant music. The melodies fit the mood exceptionally with their light staccato tones! In fact, I have the best testimonial! When the four of them were talking about going out to eat, and Eric says they can’t take Natalie because of all the stuff in the back; the foreboding music came up, and my 3-year-old said, “Mommy, I scared!” So, yeah, the music did its job! And speaking of music, WAY TO BRING BACK THE 80’s! That was amazing! Use what we already have! Good move!

Time to chat about Brooks. He’s not quite as bad as some of the dead-end boyfriends I’ve seen in the past, but he chalked up 4-5 major strikes! Natalie called him “a good boyfriend”. Yeah…how? He:

1. Forgot she hated chocolate ice cream.
2. Sent her lilies when she was allergic. (HILARIOUS moment when she inhales deeply, then has to stifle her sniffles.)
3. Thought a job was a good Valentine’s present.
4. Actually TOLD her he came to visit because he was nearby scouting for free.
5. The worst of all! He didn’t even know her birthday!

By contrast, now we’ll mention the 3 simple ways Natalie lists, (angrily at the time,) that make Zach a perfect guy.
A. “Tending to everyone’s emotions”
B. “Making sure everything’s okay”
C. “Noticing every detail”

Not that hard, right? 😉 Well, to wrap up, I think this movie was pretty cute. We’ll have to see how it measures up to the rest of Love Ever After. And for your bonus entertainment and enjoyment, below is the link to my latest interview with the awesome Milo Shandel, who we get to enjoy on BOTH Hallmark channels this month! You probably already saw “Matching Hearts”, but don’t forget to set your DVR or tune in this Sunday for “Dead Over Diamonds: A Picture Perfect Mystery”.

And with that, goodbye until our next #FaceOffFriday! 😀 This is Hooked Heartie, signing off! May your heart let your hope blossom!

Hello! What do you think of the new profile picture? I thought with the different hair, it was time for an update.

Well, we’ve reached the end of another week, and that means…that’s right! There are only 16 days until we’re back in Hope Valley. It also means that there are 17 days until my Season 7 premiere Heartie Party. So if you’re going to be in the Austin TX area on Monday, February 24th, let me know, and I’ll send you an invitation.

The rivalry continues! Round Three! Last time we left things, Nathan was ahead by quite a stretch. It was Nathan – 7, Lucas – 0 . As I said before, I’m keeping score at the same pace as all of you. And now, both characters have had their introduction episode, so I expect events to balance each other a bit more evenly. And that means things will heat up quite a LOT! So, LET’S GET READY TO RUMBLLLLLLLLLLLLLLLE!

LUCAS:
+1 Shows support for the library, and wishes Elizabeth luck in a very charming manner
+1 Tells her to call him Lucas

NATHAN:
+1 Didn’t blow Elizabeth off when she said she needed to talk to him, and promised to come by later
+1 Opened up about his family and their background

E8: HOPE IS WITH THE HEART

LUCAS:
+5 Gave Elizabeth the library
+1 Talking to Baby Jack about the books he’ll read
+1 Helping with the repairs
+1 Got injured helping, poor guy…
+1 Asked her to dinner
+1 Backed off when she wasn’t comfortable with the idea
+2 Totally hit on her in the library, even if he tried to pass it off as quoting a book

NATHAN:
+1 Going to look for the children together
-1 Disparaging Lucas “He’s a lover…just not of books”
+1 Asking Elizabeth to call him Nathan

So, the smooth-operating gambler with the silver tongue prevails this week. Hats off to Lucas! Will he maintain his streak, or will he be outdone by the underdog Mountie; he is trained in combat after all. We’ll find out! This is Hooked Heartie, signing off! May your heart let your hope blossom!